The stinging insect classification consists of species, all with stinging capabilities. While some of these insect species prefer to avoid stinging, they will when provoked. Do not think you are safe because you are not a predator because no human or animal is 100 percent free of danger when stinging insects are nearby. Like humans, stinging insects do what is necessary to stay alive, while protecting their colonies and young.

The stinging insect was deemed by a renowned entomologist, a scientist who studies insect species. The term has become extremely familiar to the residents and businesses of San Antonio. In fact, it is no longer an insect classification utilized by exterminators and entomologists. No one needs to be a specialist to know what the stinging insect classification represents. It represents a group of insect species with stingers, some of which are dangerous and others not so much.

Why Are Stinging Insects Infesting My San Antonio Property?

Stinging insects do not set their mind on infesting a specific property in San Antonio. Instead, the insects just happen upon what they believe to be a good place to build a nest. If your property just happens to be on the insect’s radar that day, it will become a target for a new nest.

It is believed, stinging insect property infiltration is by accident. Whether this is truly the case or not has never been proven. Some stinging insects are drawn to a specific type of wood, such as the carpenter bee, which is attracted to decaying softwood trees. It is important to know this information because it can prove to be helpful later down the road. Not saying, a stinging insect colony will infiltrate your property, this is just useful information for property owners in San Antonio.

What Dos You Need To Know About San Antonio’s Stinging Insect Classification?

As a property owner and resident of San Antonio, it is important to know how to identify each stinging insect and its nest. This valuable information will later be applied to a pest control strategy to ensure the best results, in the shortest duration.

Paper Wasp Stinging Insect Species – The paper wasp is very similar to the yellowjacket species. In fact, some pest control experts have admitted to being confused about the identification of the paper wasp. The stinging insect is moderately aggressive when not provoked. Under duress, the insect will become extremely aggressive.

The paper wasp erects nests from a paper-like material that derives from organic materials, such as plant fiber. As the colony grows, so will the nest. In the early phases of the process, the nest may not be visible from afar or up close. Keep this in mind when spending time outdoors, whether it be in your backyard or national forest.

There are two primary paper wasp species that inhabit properties in Texas. These include the Northern paper wasp and European paper wasp, both of which are moderately aggressive and similar to the yellowjacket. The adult is dark brown or black with thin yellow stripes. The legs are elbowed, with the rear being the longest for faster takeoffs. The legs are so long, they dangle when the insect is in flight.

Yellow jacket Stinging Insect Species – The yellowjacket is highly aggressive in the fall and summer seasons. Entomologists contribute the maximum aggression to the colony size, which is larger during these seasons than any other time of the year.

Yellowjackets are extremely dangerous not only due to their aggressive nature but also their ability to erect nests underground. There are not many members of the “Hymenoptera” order that are known to build underground nests.

The mature yellowjacket is black with thin yellow stripes. The head is oddly shaped to ensure the speediest flights (no evidence to back this claim). The three sets of legs are golden yellow or yellowish/orange, while the antennas are dark brown or black in color.

Unlike the yellowjacket and paper wasp, the bald-faced hornet is black with white, off-white, or light-yellow markings. The leg coloration does not match like most stinging insects, as the rear and middle legs are solid black, and the forelegs are white or off-white.

Honeybee Stinging Insect Species – As one of the least aggressive of all the stinging insects, the honeybee is considered by many as a “gentle bee”. The insect does not build nests out of organic wood materials, but wax. The honeybee hive is comprised of tiny wall octagon-shaped openings that are utilized to hold honey.

Bears and other insect predators are drawn to honeybee honey. To protect the hive, the colony chooses higher locations, such as tall tree branches, eaves, rooflines, attic vents, and soffit. Unfortunately, even these locations cannot always protect the hive from bears.

In controlled environments, the honeybee can live up to 2 years. However, this only applies to the queen, the rest of the colony will not survive more than 200 days.

Carpenter Bee Stinging Insect Species – The carpenter bee species is comprised of both males and females, with the latter having the longest lifespan. The male dies soon after breeding, climbing deep into a bored hole before the end. The female will continue her life, building 3/8-inch holes to secure her young from predatory insects and animals.

Out of all the stinging insect nests, the carpenter bee is one of the most difficult to identify. Like the underground yellowjacket nest, the carpenter bee nest is hidden out of view. The insect has strong mandibles that can power through wooden structures – trees, fence posts, mailboxes, deck railing, siding, and roofing.

Differentiating between the male and female is generally not that difficult when you know what to look for. The male has a yellow dot on his face, while the thorax is covered with yellow fuzz.

What Treatments Are Available For Stinging Insect Infestation?

We offer several treatment options for stinging insects. However, we highly recommend our industrial-strength insecticide. These high-quality extermination tools have been utilized for decades. Evidence shows pesticides dating back to 2000 BC.We continue to work with Texas entomologists to

Yes, when it is implemented improperly, mishandled, and transported unsafely. Our extermination team knows how to properly treat stinging insect infestation with conventional pesticides and insecticides. We have a pesticide safety protocol that must be followed to a tee.

In addition to our pesticide safety protocol, our line consists of only brands approved by the Environmental Protection Agency “EPA”.

Yes, we prefer custom strategies for this specific purpose. A qualified pest control technician will inspect your property to determine if stinging insects are present. If so, the technician will assess the situation to determine the severity of the problem. All data collected throughout the inspection process is then applied to a custom treatment plan.

We also offer free written quotes for consumers with a limited budget.

The only way to prevent a repeat infestation of stinging insects is to remove all attractions. For example, the carpenter is attracted to decaying wood. Removing the rotting wood will eliminate the problem for the following breeding season.

Routine inspection of your property will also help with early detection. The earlier the insects are discovered, the quicker treatment can be implemented.

When Will The Exterminator Be Available For A Pest Inspection?

We can process your inspection request with 24 and 48 hours. We will notify you to determine which date and time will suit your schedule the best. 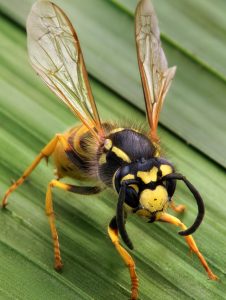